Latest Updates on Statue Of Equality 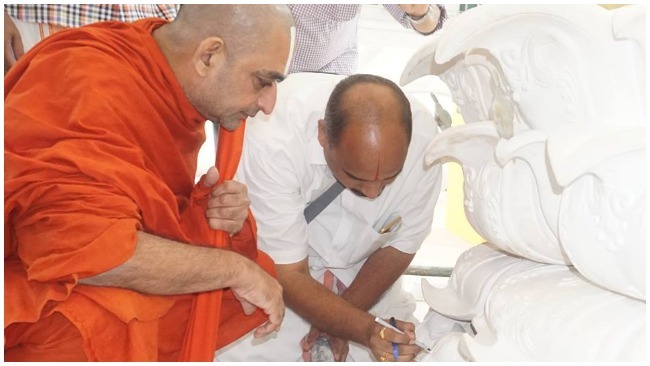 Updates on Statue Of Equality

It is already 2016! The 1000 year birth anniversary of Sri Ramanujacharya is just 18 months away!

The plan for Sri Ramanuja Sahasrabdi was changed twice, to suit the needs of future requirements. Now, the final design is complete, and a walk-thru video is being created to explain the final plan. It will be released in 15 days, along with new details and information to bring all of you up to speed and keep you updated.

The project has been divided into 3 phases:

Phase 1 – Dedicating Ramanuja Statue to the world in 2017

Initially, an announcement was made inviting all devotees to offer their one month’s salary for the project. Their names will be incorporated into the the design of the project in the designated area.

In addition, we have also decided to offer another way for devotees to contribute to the construction of the statue. It was calculated that each square inch of Ramanujacharya’s statue is worth Rs. 1,16,000.

All who are interested may also contribute in this manner.

The Chinese manufacturing company responsible for the construction of Sri Ramanuja Sahasrabdi Statue has created a prototype, to scale of 1/10th of the original. The model was inspected by HH Chinna Jeeyar Swamiji, Dr. Rameswar Rao garu and the rest of the Sahasrabdi team at the end of October, 2015. A total of 14 corrections were noted, addressed, and rectified.

So, it is high time to make arrangements before the arrival of the materials for Sri Ramanujacharya’s statue in Sri Ram Nagar.

What needs to be done before the arrival?

It is high time for all interested devotees to participate in and promote this divine project. Any amount donated now will directly go into the construction and erection of Sri Ramanuja’s Statue. We invite the attention of all devotees to make use of the time in the best way possible. We know there are many people who are interested, if awareness is brought to them. But there is a requirement of one to take lead, reach them and spread the word! Let us all make the best use of the time available and contribute to the Statue of Equality.

Time is flying! Hurry Up!